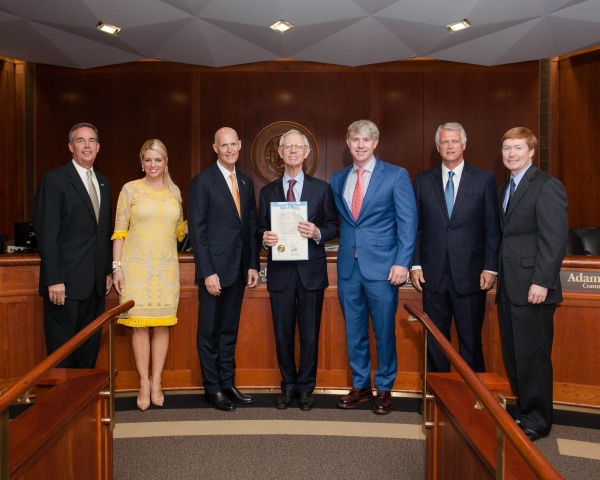 CONTACT: James Miller
This email address is being protected from spambots. You need JavaScript enabled to view it., (850)701-3015

TALLAHASSEE, FL – The Florida Retail Federation (FRF), the state’s premier trade association representing retailers, congratulates Bealls, Inc. for their 100th anniversary of successfully providing quality merchandise to Floridians. As part of the celebration of their centennial anniversary, Bealls was recognized this morning by Governor Rick Scott and members of Florida’s cabinet during a cabinet meeting, where Chairman Bob Beall received a proclamation from the Governor.

“I want to congratulate the Beall family and team members for reaching such an incredible milestone and for being such a valuable asset to retail in Florida,” said FRF President/CEO Rick McAllister. “With their corporate office headquartered in Bradenton, Bealls has been one of the industry leaders in Florida and nationwide for more than a century, and shows no signs of slowing down. We are proud to have had them as members for the past 50 years and we look forward to continuing to support their future success.”

Governor Rick Scott said, “We are excited to recognize the achievement of the Beall family and their associates for a century of outstanding success. Bealls was founded in Florida and has continued to create opportunities for our families for a century, including the 8,000 Floridians they employ today. We are working every day to help businesses like Bealls succeed in our state, so Florida can become the global destination for jobs.”

With more than 530 stores across the southern and eastern United States and sales exceeding $1 billion annually, Bealls has continued to stay fresh and relevant by continually reinventing itself, growing key markets and listening to its customers. Bealls joined FRF in May of 1965 and will be celebrating their 50th anniversary of membership next month.

“Bealls has been serving and creating opportunities for Floridians for 100 years, and we are grateful to Governor Scott for recognizing this momentous accomplishment,” said Bealls CEO Steve Knopik. “We are proud to be a family-operated, Florida-based business and we look forward to another century of success.”

The Florida Retail Federation will honor Bealls' 100th anniversary in business and their 50th anniversary as an FRF member during a ceremony in June.

More in this category: « 2020 Disaster Preparedness Tax-Free Holiday Families to Spend More Than Ever on Moms this Mother's Day »
back to top