As Florida's Own Tampa Bay Buccaneers Prepare to Face-off Against the Kansas City Chiefs at Raymond James Stadium, Forecasts Show Consumers Will Spend Less This Year, But Still Tune In 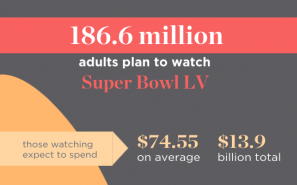 Tallahassee, FL – The Florida Retail Federation (FRF) announced today that planned gatherings for the upcoming Super Bowl are at a historic low but a record number of viewers will tune in this year. The forecast is based on data collected during the National Retail Federation's annual Super Bowl survey.

Given the continued threat of COVID-19, it is not surprising that Super Bowl celebrations look different this year. Just 25 percent of consumers are planning to host a party or attend a party, representing a record low for gatherings to celebrate the Super Bowl. Still, more than 186 million U.S. adults plan to tune into the Super Bowl.

The survey found that 86 percent of viewers plan to make purchases for this year's game. With the average viewer planning to spend $74.55, national spending is projected to reach $13.9 billion, or 3.3 billion less than last year.

Here's what viewers are planning to purchase:

"This year's Super Bowl is unique," said Scott Shalley, president and CEO of the Florida Retail Federation. "Not only is the Super Bowl in Florida for the second year in a row, but one of Florida's very own football teams is playing. Be sure to show your support for the home state by purchasing your Super Bowl necessities at a Florida retailer."

Here's the breakdown of what viewers value most:

"Florida's retailers are dedicated to providing customers with safe shopping experiences," said Shalley. "Many of Florida's retailers cater to different needs by providing services to buy online and pick up in-store, receive curbside, or have your products delivered to your door. Take advantage of all they have to offer. Whatever you're looking for, Find It In Florida!"

For more information on the 2021 Super Bowl data available through the National Retail Federation, visit: https://nrf.com/super-bowl-data-center

ABOUT THE FLORIDA RETAIL FEDERATION
The Florida Retail Federation is the statewide trade association representing retailers -- the businesses that sell directly to consumers. Florida retailers provide one out of every five jobs in the state, pay more than $49 billion in wages annually, and collect and remit more than $20 billion in sales taxes for Florida’s government each year.